Reactive silanes (EU) can be used in multiple applications to enhance the performance of coatings. They can improve adhesion to inorganic substrates, provide crosslinking, improve pigment dispersion, improve hydrophobicity and scavenge moisture. A silane (EU) that contains at least one carbon silicon bond (CH3 – Si -) is called an organosilane (EU). Reactive silane is the term used to define compounds that have a trialkoxysilyl group and an alkyl group (R) containing a reactive constituent.

The trialkoxy silanes that are discussed in this article are those that contain primarily trimethoxy (EU) groups, as these molecules are the most widely used to enhance coating performance in a wide variety of applications, as follows:

Adhesion Promoter (EU)– Silanes, when added to paints, can enhance adhesion to inorganic surfaces including metals and glass.

Crosslinking Agent (EU) – Selective organofunctional alkoxysilanes can react with organic polymers to provide a trialkoxysilyl group into the polymer backbone. In turn, the silane can then react with moisture to crosslink and form a three-dimensional siloxane cross-linked structure.

Dispersing Agent (EU) – Used to improve the hydrophobicity of inorganic pigments, flow and the ability to be dispersed in organic polymers and solvents.

As illustrated in Figure 1, trialkoxysilyl groups can react directly or indirectly in the presence of water with hydroxyl groups. The other organofunctional group (R) can participate via a crosslinking reaction with a resin in a coating. In regard to the reactions and interactions with a surface, there are many complexities and dependent variables. For example, the rate of hydrolysis of the trialkoxysilyl groups with moisture to form silanol groups (R – Si- OH), which in turn self condense or crosslink, competes with the reaction of the silanol groups with the substrate hydroxyl groups. These competing reactions can vary depending on moisture level, pH, and rates of reverse reactions, as hydrolysis is reversible. Hydrolysis of trialkoxysilyl groups to silanols and the subsequent self-condensation to form a siloxy crosslink (- Si – O – Si -) can be accelerated by the use of a suitable tin catalyst such as dibutyltin dilaurate. 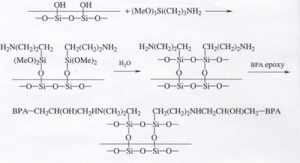 Except for those applications requiring polymerization of a reactive silane into a resin backbone, the reactions illustrated in Table I can occur under ambient conditions.

Reactive silanes provide utility to improve coating performance in a number of applications, including pigment wetting, improving hydrophobicity and increasing contact angle, enhancing adhesion over a number of metallic and inorganic surfaces, coupling agent between differential materials, scavenging moisture to provide improved stability, as well as crosslinking to improve physical and environmental properties.

How to Apply Silicone Sealant

What is Adhesion Promoter Used for
Scroll to top