Blog&News
You are here: Home / Blog&News / News / Industry news / The Use of Mixed Silane Coupling Agents

Organofunctional silanes used as coupling agents or primers for the adhesion of organic polymers to mineral substrates are almost invariably used at more than mono-layer coverage of the mineral surface. Regardless of the method of application, they are believed to condense on the mineral surface to build an oligomeric siloxane network capable of forming covalent

“oxane” bonds to the mineral surface. The oligomeric siloxane (condensed silane) layer is modified by its reactions with the resin during fabrication of composites. The resin phase diffuses into the siloxane layer and reacts to form an interpenetrating polymer network (IPN) during fabrication. The resulting interphase region must have certain characteristics for optimum performance.

require controlled drying at an elevated temperature or use of a catalyst.

of the siloxane and reaction with the resin.

It is not always possible to optimize all of these factors in a composite with a single silane, but

many composites can be improved greatly by using a mixture of silanes.

Mixed silanes have been used for years in primers and coupling agents for composites.

Commercial compositions are generally proprietary and are formulated for specific handling

properties of the glass or of the finished composite.

Some typical silanes to consider in mixed silane applications are shown in Table 1. 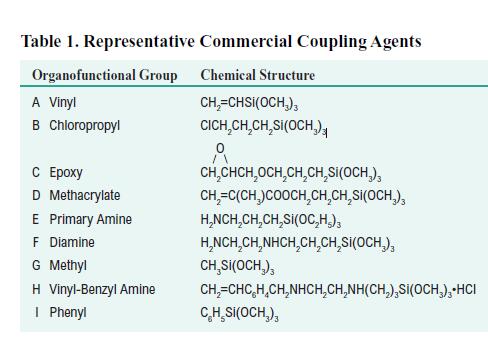 Methylsilane G,phenylsilane I and chloropropylsilane B are not generally considered to be coupling agents with most resins, but they may contribute hydrophobic siloxane structures to mixed silane coupling agents.

Vinyl silane A is a coupling agent for polymers curing by a free radical mechanism, but it may also

Silanes with small organic groups on silicon (A and G) will crosslink to tighter siloxane structures than can be obtained with silanes with large organofunctional groups. Amine-functional silanes E, F and H can act as catalysts for siloxane formation in mixtures with neutral silanes.

agents in promoting adhesion between different phases. Individual silanes in a mixture may

A catalytic amount of an amino-functional silane (about 1% of total silane) may be beneficial in condensing the siloxane with an inorganic substrate. However, larger proportions of aminosilanes

Condensation polymers such as urethanes or epoxies may benefit greatly by mixing neutral,

hydrophobic silanes with reactive silanes. A condensed siloxane layer derived from a reactive

Unreacted functional groups remain, then, as hydrophilic points for attack by water.

About 90% of neutral, hydrophobic silane seems about optimum in these mixes, and phenyl or

chloropropylsilanes seem to provide the best compatibility with most polymers.

High-temperature composites benefit the most if stable aromatic silanes are mixed with organofunctional silanes in the coupling agent.

Phenyltrimethoxy silane is the preferred aromatic silane. A major proportion of the mix should be aromatic.

Only enough organofunctional silane should be included to give initial compatibility and reactivity with the matrix resin. During cure, the siloxane layer further condenses to improve the integrity of the siloxane/resin IPN.

Even after the aliphatic organofunctional groups are burned off from the siloxane, an interpenetrating aromatic silicone remains that has heat and oxidation resistance comparable to the most stable organic resins.